Born and New Orleans, I attended Epiphany Elementary School, St Augustine (1 year) and then finished high school at Ben Franklin. After which i went to Xavier University. I began my college education in Biology Pre- Med but changed my major a few times before choosing Art with a focus in Graphic Design. I graduated from XU in 2003 and entered graduate school at The Institute of Design in Chicago. With one year left in the program i took a year off to create a series of paintings inspired by the people affected by the tsunami of 2004.  The next year hurricane Katrina hit New Orleans the day that i was returning to complete my last year of study. I withdrew from the program by the end of that week and as soon as people were allowed back into the city i moved back home. While living in my parents gutted house in the Gentilly neighborhood i began renovating homes with a good friend and started NOYO Designs Inc. (A design company / clothing line ). Over the next several years i began to drift from commercial graphic design work to making my own art and incorporating elements of my digital design work into my process 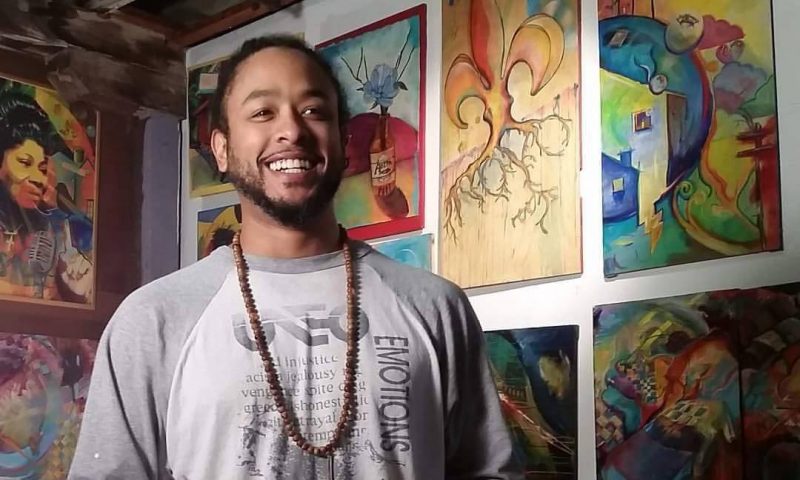 There was a time that i created as a means of letting things go. (my father, grad school, and New Orleans after Katrina). After witnessing the storm and the changes that came after it i now create to hold onto or preserve things.

Seeing the face of a city change so quickly has brought me grief and purpose. i now create to preserve pieces of the things and people that make New Orleans so special and magnify them. Our culture warriors act as ambassadors of our way of life to people around the world. Instead of creating to let go I now create to hold on. My subject is now focused on ways to celebrate the defenders of the spirit of New Orleans.
Another ongoing underlying theme in much of my work is the effects of technology on humanity and our disconnectedness from other humans.
I create using paint and other media. I use several layers of watery acrylic paint. My dad once told me to let the paint be paint and that has always stuck with me; allowing dripping and accepting what happens naturally.

The works i create are usually an experiment of techniques used to create texture and visual blending through use of transparent colors. My recent work has been both abstract and representational in an energetic and at times chaotic expressionist/impressionistic movement.While aspects of my work are abstract the subject of my work is often based on personal experiences and elements of life in New Orleans.