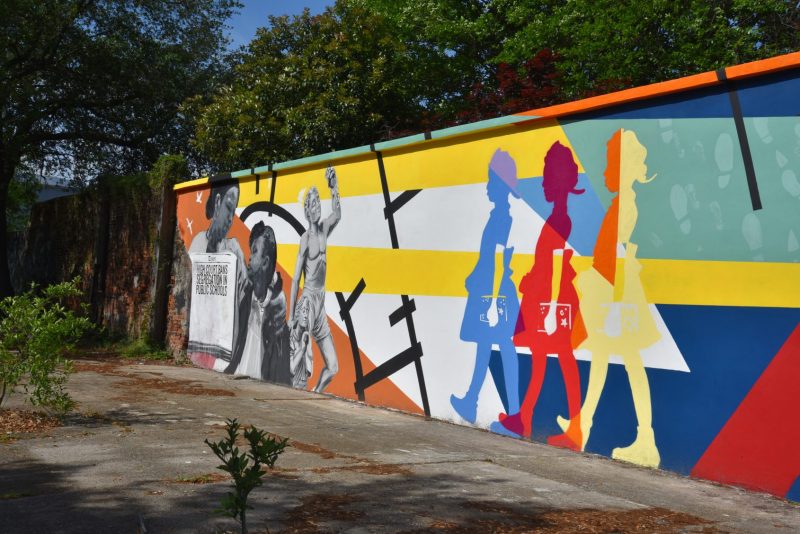 Homer Plessy (of Plessy vs Ferguson) a black man,  was arrested for buyin a ticket and riding in a train car designated for white people. At the site of his arrest is currently a historical marker thanks to the hard work of community members.  The NOCCA Institute commissioned me to activate the space now known as Plessy Park and pay tribute to Homer’s legacy.

These are Times  was designed with the help of Carl Joe Williams, Jon Moody, Paul Wright and was produced with much help from Langston Allston.
(Im honored to have been able to work with Langston on this project). As well as other great artists who helped including Charlie Vaughn and Asia Palmer.

There are no photos of Homer Plessy and before joining the citizens committee he was a shoe-maker. This mural celebrates the everyday man who chooses to stand up ad fight for civil and human rights. It is a series  of vignettes that show pieces of the struggles of civil rights in America, the accomplishments of past activism, and visions of an ideal future. The center-piece of the mural is a blindfolded black boy who is holding the scales of justice next to a dancing black boy dressed as Liberty, asking the question of the viewer what might liberty and justice look like through the eyes of another person. Much of the murals message is summarized by Gian Smith in the newspaper article on the far left of the wall.  The title of the piece comes from the poem on the little boy’s shirt which was written by Kataalyst Alcindor.